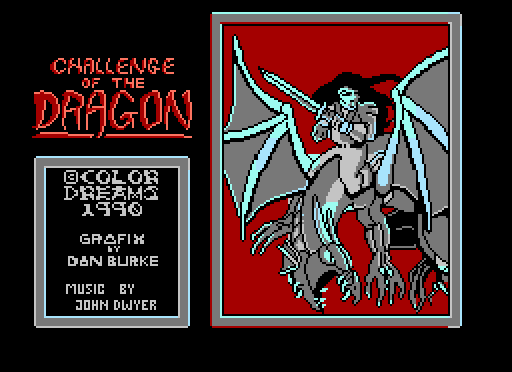 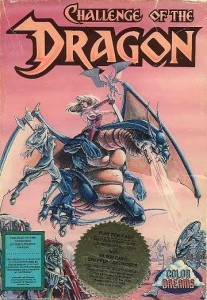 The dragon was resting peacefully, when suddenly two buxomy women decided to have a catfight in his lair. 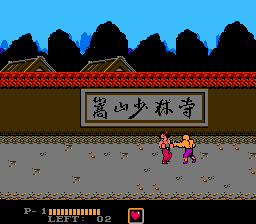 Sometimes games are so bad, you enter into a state of zen while you’re playing them. You transcend whatever kind of feces the game is throwing at you, whether it be poor controls, frustrating game mechanics, or just downright ugliness and press on through the brown/green/yellow/red (see a doctor) muck because you simply can’t stop playing. What is it about these addictive games, awful though they may be, that make them different from the “normal” bad games, the kind where it’s a chore to even play fifteen minutes? In this review for Challenge of the Dragon, I shall attempt to answer this question with bravery and honor.

POINT #1: Challenge of the Dragon is an unlicensed game.

Unlicensed games are usually a mixed bag on the regular NES. Some of them are downright horrifying (see the upcoming Cheetahman 2 or the yet to be reviewed Action 52, both by the same developer Active Enterprises) while some – particularly Tengen’s output – hold up next to any other licensed game. One thing’s for sure: unless you have some bang-whiz fantastic developers, unlicensed games carry with them many “quirks.” For example, in Challenge of the Dragon, I have zero idea what’s going on. I think the game is supposed to be a brawler, but the graphic/color scheme really runs together in such an obscene, fascinating way, to the point where I jumped and flew across the screen, while enemies flew after me, back and forth, back and forth, until I felt hypnotized by the character’s motions. Once I decided to progress and make contact with the enemies, I button-mashed the crap out of the ‘B’ button and I advanced quickly. This brings me to…

POINT #2: Each level contained the same gameplay, yet each level’s enemies got stranger.

As I said, I think the genre of the game is a beat-em-up brawler, but it’s not like any Double Dragon or River City Ransom. You move forward by beating up knights, ninjas, pink panthers (seriously!), dragons, and whatever else the game feels like throwing at you. The farther I got, the weirder the enemies, and the more I wanted to see what the game would provide for a punching bag. Pressing ‘B’ makes you attack, and each time you press it, your character does different moves. Sometimes he/she thrusts forward with his sword, other times he kicks, still other times he punches. It sounds like it could get annoying, but jumping in the general vicinity of an enemy and randomly mashing the ‘B’ button is a sure-fire way to lessening the dragon’s challenge. Also, jumping is programmed to the ‘A’ button, thank God.

Instead of trying to be “ambitious” like Bible Adventures, an unlicensed “gem” from Color Dreams’ sister company Wisdom Tree, Challenge of the Dragon does what it intends to do: provide a shoddily developed beat-em-up experience that leaves you wondering why you care as you continue to move forward. I can’t really recommend the game as it is awful, but I can say that the game intrigued me, even as it repulsed me. That’s got to be worth something.