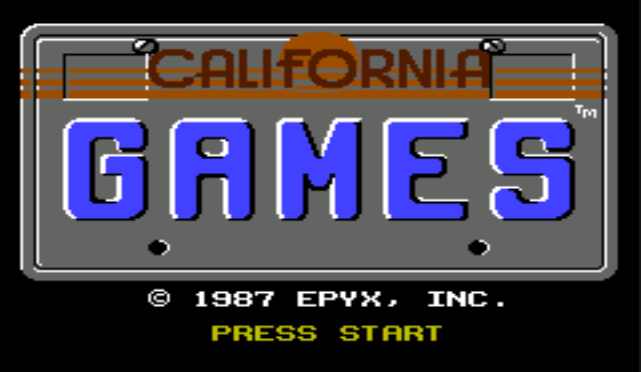 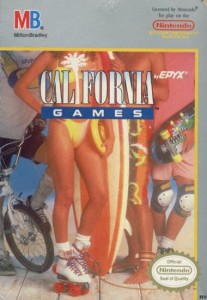 This cover contains all the evil wrought in the 1980s. It must be destroyed. 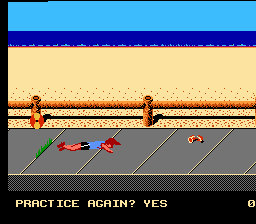 When sidewalks fight back…

Before Rare blew our collective gaming minds in 1994 with the graphical powerhouse Donkey Kong Country, they blew their collective programming chunks in 1989 with the underwhelming, oft hilarious California Games. Apparently hackysack, surfing, BMX bikes, skateboarding and other Xtreme sports were only available in California in the late 80s; at least that’s what the British-based Rare implies with this particular gray cartridge’s titular title. Plus, it does sound better than Florida Games or Wyoming Games or some other crap. Whatever you call California Games, though, this game is crap; in the 80s, in 2011, and forevermore.

I will rate each game in order of least to most crappiness because I can:

Foot Bag is probably the least crappiest game, if only because I was so amused at seeing virtual hackysack in a NES game. Control an androgynous young something and do tricks and twirls with your sack for as many points as possible. I have also never heard hackysack called “Foot Bag,” which, to be honest, offends me.

Flying Disk would be interesting if it went anywhere. Control your speed and and your angle and let your frisbee rip. Must Rare be so stuffy? “Yes, let’s go out for a jolly good game of golf flying disk, mates!”

Surfing is serene and there’s not much to really say about it. Get on top of the wave and stay there. I think sharks come along sometimes, but once you get on the wave, you don’t need to worry about anything. Bland, useless, etc.

BMX started off ok. You’re basically pedaling along a track, avoiding obstacles and trying to do tricks. Problem is, the BMXer is only capable of doing one of the aforementioned. Try to do both and you will fall down, while text at the bottom of the screen insults your abilities with quips like “Bummer!” and “Way to biff!”

I probably should have included Skating lower on this list because it features my favorite “biffing” animation. When the young girl on rollerskates fails to jump over a crack in the sidewalk, her whole body and face smack down hard onto the pavement. I’m pretty sure more time was spent making that animation then this entire game. Other than that, Skating is no more Californian than the rest, and I’m not sure what that means.

Last but not least, the crème de la suck, the Half Pipe. Nowhere at any time could this ever be considered fun by anyone. The controls are nigh impossible to figure out. Your character will continue to fall and slide across the halfpipe like a war-torn crash dummy.

The real reason to seek this game out is if you’re an insane Nintendo collector who happens to have two multi-taps, eight controllers, and lots of booze for the people you want to play California Games with you. Yes, up to eight people can play this game. Considering the time period in which this was released, it’s pretty ambitious, though no parent in their right mind would have blown hundreds of dollars for California Game parties back in the late 80s. This game has a literal replay value of nil. You can trust me on that because calculating the sum of “nil” takes awhile. Dude!