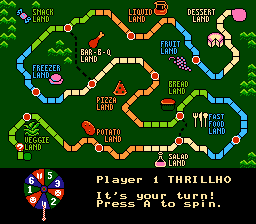 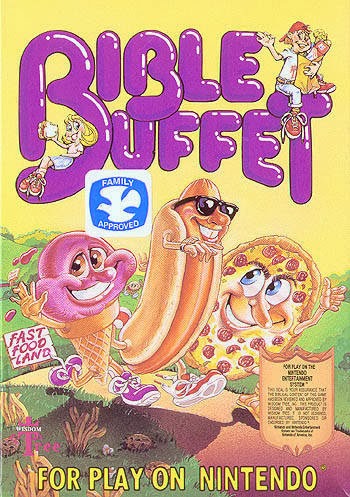 Those are really food demons in disguise. Don’t be fooled! 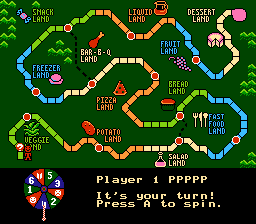 I recommend eating something before venturing into Buffet World.

Was this game made in the Bible Belt? I’m pretty sure it’s tradition to gorge one’s self after church in the South. You know, fried chicken or Chinese food, or Chinese food consisting of fried chicken. There’s limitless possibilities there! This is another Wisdom Tree extravaganza, although this time there’s little to no references to the Bible, making the reasoning behind the game’s title obscure and strange. I suppose Wisdom Tree can do whatever they want because they’re the little man making unlicensed cartridges, while fighting against the evil company Nintendo; if they want to name their game Bible Buffet, they’re gonna do it, con sarn it! Sadly, this game was made in 1993, and was nowhere near as successful as Bible Adventures, so whatever battle they were waging against Nintendo was all in vain. I’m making up stuff now to fill space. Gluttony is wrong.

This is a strange hybrid of board game and simplistic platformer. You can play this with up to four players, which is pretty amazing considering there were hardly any licensed games that allowed four players. The board consists of different food-related lands i.e. “Salad Land,” “Fast Food Land,” etc. You spin a wheel to determine how far your player goes on the board, and each land covers about eight to ten squares. Once you land on the square, you enter a world filled with foodstuffs that desire your soul. Each square has a different world contained within, and there’s a good number of worlds and squares within the game, so the replay value is strangely high. As you destroy the various foodstuffs that attack you, you can eat their mangled corpses and gain “pounds,” otherwise known as points. There doesn’t seem to be a point in gaining weight, but if you’re playing with others, it might be nice to see who came out the fattest at the end of the game.

Progressing through the levels is a cinch. Each one takes about thirty seconds to a minute to complete, which is good if you have a decent number of players. Personally, I had fun all by myself. Unlike something like Mario Party which forces you to play with the computer when you’re a loner, Bible Buffet allows you to go it alone, and every turn is yours. If all you want to do is explore the levels, this is highly recommended, and truthfully, having more people will only slow the game down. It’s every chunky man for himself! Watch out for these so-called “pop quizzes,” though. They appear here and there, but the game never gives you the actual questions, just the option to select “true” or “false.” It doesn’t matter because there’s no penalty to getting a question wrong, but it is strange. Perhaps they included a fold-out bib with the game that contains all the questions, or perhaps Wisdom Tree is just a forgetful, spiteful company.

If I had to choose one game with the word “Bible” in it that has nothing to do with the Bible, I’d pick this one. It’s infinitely more playable than Bible Adventures, and while the levels are easy, they’re strangely compelling. What crazy food is going to attack me next? Baked potatos? Pickles? Excellent. What strange wonders await me in Freezer Land (seriously, I want to know)? Just remember: much like it is in America, the one who is the fattest at the end of the game (or their life, whichever comes first) wins.