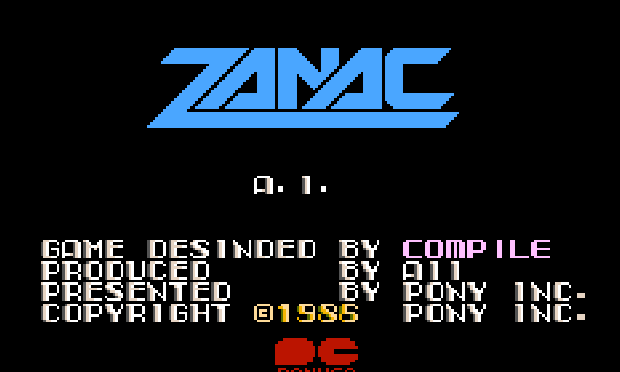 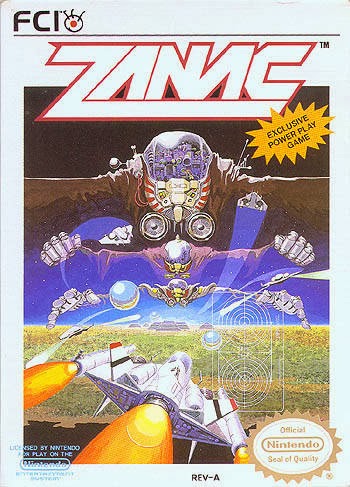 They’ve got the whooooole world in their hands. 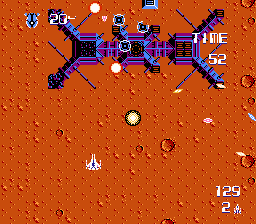 I can’t count the number of times I died here.

Zanac is either a gentle joyride across twelve planets, or a relentless shoot-em-up co-sponsored by the devil. It’s up to you, or rather, your play style. Zanac‘s difficulty shifts based on: how quickly you fire your weapons, whether there’s special weapon upgrades in the vicinity, and whether you destroy a boss or not. In essence, the stronger you are, the more enemies the game will unleash on you. It’s an engaging concept that encourages different types of play, particularly during boss battles.
The majority of shmup boss-battles expect you to engage in all-out war: fire as much as you can, as hard as you can, while hoping for the best. In Zanac, the bosses will unleash extra enemies on you while you attack them, but the amount they release is up to the effort you exert. In order to beat them without becoming overrun, you must find the appropriate shooting speed – somewhere between “barrage” and “gentle.” Fail to beat the boss before the timer runs out and you won’t die, but the game does move you along, sans point bonus.
Points are always nice when you’re low on lives, which you likely will be. Worse than losing lives, however, is losing your delicious weapon upgrades with your life. The Good Ship Zanac has a traditional pea shooter attack and a special attack, both of which can be upgraded to ridiculous proportions (there are eight special attacks in all, which is crazy considering how early Zanac was). One transcendent moment in particular had me firing a super-charged triple attack, while a double-layer circular shield evaporated enemies around me. I basked in my god-like powers for about five minutes before a stray bullet exploded my ship and ego. Once you lose that kind of strength, it’s difficult to muster up the courage to continue.
Thanks to Zanac‘s ongoing flexible difficulty, the fight to regain your strength is less taxing than other shmups. That doesn’t mean you won’t struggle, though, particularly if your brain is hard-wired (as mine is) to shoot as fast and as much as you can during any shmup. If you’re not used to shmups and you want to take it slow, Zanac might be the perfect entryway point. I wouldn’t know. For me, it was a butt-pucker extravaganza I won’t soon forget.
B+
The following two tabs change content below.