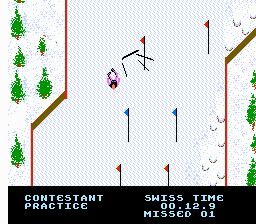 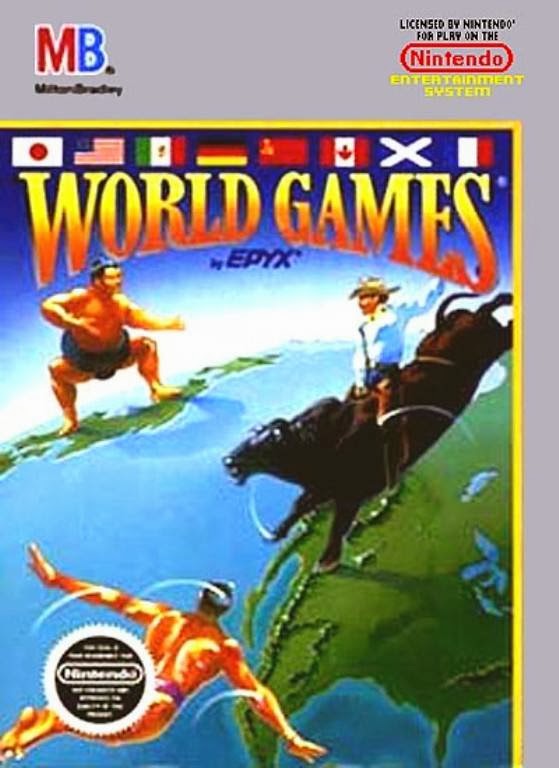 “Gentlemen, with our powers combined, we could rule this world!” 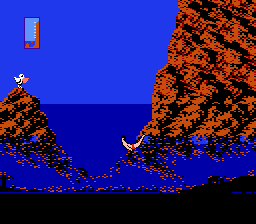 The pelican watches the stupid man with great interest.

World Games may have united gamers from all nations when it debuted in ’86 for the Commodore 64, but the NES port is as distasteful as a Sochi hotel room.
There are eight events to choose from, attempt to learn, then condemn, in that order: Weight Lifting, Barrel Jumping, Cliff Diving, Slalom Skiing, Log Rolling, Bull Riding, Caber Toss, and Sumo Wrestling. That’s quite a variety, and the game gives some nice history about each sport prior to playing it. Unfortunately, most of the events have precise-to-a-fault controls, to the point where you’ll be replaying them more out of a determination to accomplish anything than to win.
On Bull Riding, for example, you press the D-pad in the direction the bull is bucking, then when the bull starts to twirl, press ‘Down.’ If you stay on for eight seconds, you’ll win the gold medal, but good luck accomplishing that much. Also, there’s no way of knowing what you’re doing wrong. The game gives no hints or corrections, just a “Try Again” slap in the face. Slalom Skiing – where you ski in between poles on a downhill slope – has the worst control scheme. Tap ‘Left’ and ‘Right’ on the D-pad gingerly as you make your way through the course. Too much jabbing in one direction or the other will make you turn sideways, throw off your groove, and make you miss poles.
Not all events are that misguided, however. Log Rolling and Barrel Jumping are easy to learn and difficult to master, which is how the entire game should have been. World Games’ perfectionist demands might resemble what real Olympic champions have to endure before they even reach the games. At least in the real Games, though, athletes have a chance to win a medal and have their names written in the history books. In World Games‘, the grueling process isn’t worth the payoff.
D+
The following two tabs change content below.