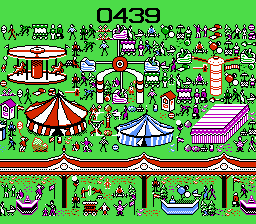 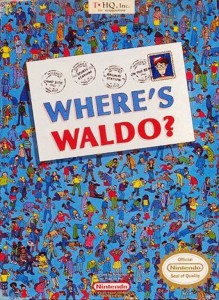 Why… there he is.

I understand this is a circus, but beyond that…

Had Waldo the courtesy to save children’s eyes before they went blind of their own accord, we wouldn’t have been forced to “play” a video game version of Where’s Waldo? And yet, because every remotely popular children’s toy/book/whatever must be made into a video game, Waldo’s financial gain is our continued ocular ruin. However one feels about Waldo’s miniature endeavors, though, it’s impossible not to admire the imaginative landscapes he dwells in. Yet in Where’s Waldo? one can hardly understand what’s being rendered, let alone where Waldo might be. Imagine opening a Waldo book and visualizing one of his hide-and-go-seek fests in a jarring pixelated fashion. My glasses do nothing as I search for him amongst the eight levels, and not because they are of poor quality. The levels themselves are boring and nondescript: the Train Station, the Forest, and God help us all, the Castle, among others. Levels like the Subway (a maze structure) and the Landing Pad (a slot machine game) try to diversify the gameplay, but they add little to an already bare-bones title.
There are three difficulties – Easy, Medium, and Hard – designed to make Waldo seem like a game with replay value. Easy gives you ten minutes to solve every (!) level, Medium gives you eight and expands each level slightly, and Hard gives you five minutes and an even bigger landscape. The harder difficulties also remove Waldo from his peppermint ensemble into other questionable flavors (wintergreen?!), rendering him more challenging to spot. All told, Where’s Waldo? might give you an hour of gameplay and that’s if you’re committed to the cause. Commit to nothing. Save what’s left of your eyes.
D-
The following two tabs change content below.