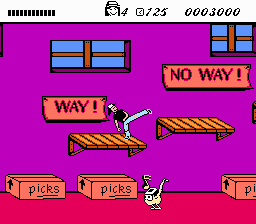 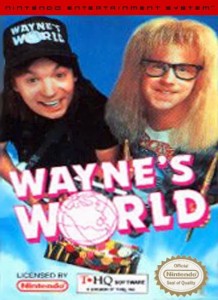 Is that a handbag next to Wayne?

What could a Wayne’s World game entail, you ask? A most reasonable question, given that neither of the “Wayne’s World” films lend themselves to game form. Party time? Excellent? Shyeah, right! Expect nothing, then lower your expectations. Guide Wayne and Garth through five platforming levels based on sets from the first film: the music store, GasWorks, Benjamin’s recording studio, etc. The levels have multiple parts, and I call them “parts” because they’re not long enough to call stages. After each part is finished – no more than thirty seconds to a minute – you’re forced to switch between Wayne and Garth. This could be a cool idea, but Wayne sucks to play. His only attack is a karate kick with poor hit detection, which does nothing against enemies with long-range attacks; Garth’s zap gun has greater reach, ensuring he gets hit much less often than Wayne. To make matters worse, Wayne and Garth share a health bar. Even if you maintain a solid amount of life with Garth, Wayne will be sure to get hit more times than he can count. Other than the occasional goofy enemy (Musical instruments! Ninjas! Bouncers!), the levels are sparse and lifeless, leaving one with little to do but scrutinize the awful production values. Vomit-soaked graphics (what’s with all the rust red and brown?), barren environments, and melody-deprived music drive the stake into the heart of this flannel-tattered beast. More so than other licensed oppressors, Wayne’s World is an adaptation that should not be.
F
The following two tabs change content below.