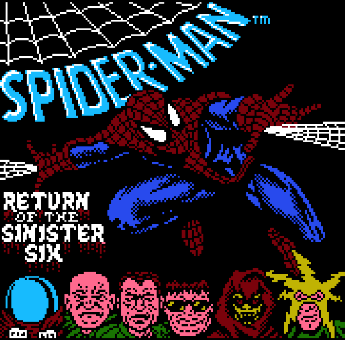 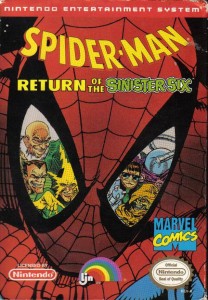 Only Hobgoblin and possibly Mysterio look even the least bit threatening. 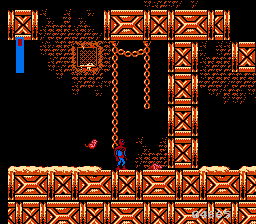 Even the rats dive-bomb Spidey. He just can’t get a break.

Electro, Sandman, Mysterio, Vulture, Hobgoblin, and Doctor Octopus have teamed up to stop Spiderman from… doing somersaults? Collecting web canisters? Punching miscellaneous thugs into random chunky bits? Return of the Sinister Six portrays Spiderman as a pathetic character, which makes one wonder why six super-villains needed to combine their powers to stop him. In the comic, Spiderman can shoot out as much silly string as he wants. He uses it to swing from buildings, tie up the riff-raff, and prevent Mary Jane from splatting on the sidewalk. In the game, he has to collect his web canisters, and they’re only for attacking. He gets ten shots of spray (white pixels) per canister before he’s resigned to fisticuffs. You don’t play a Spiderman game because you want to punch some thuglies, but you really have no choice. To add insult to injury, the hit detection is some of the worst on the NES. Spidey could be standing directly next to a gun-toting perp, but if you press ‘A’ too fast, he’ll fore-go a punch and do a jump kick away from said perp. Even if you only press ‘A’ once to punch the enemy, Spiderman won’t necessarily hit him. The proverbial pixels must be aligned in order to make the enemy go boom (every enemy explodes, even the bosses). Used Kleenex graphics, underwhelming music, and stilted controls round out this depress-a-thon. No amount of Tobey Maguire could make this right.
D
The following two tabs change content below.