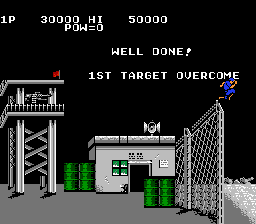 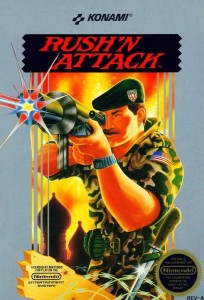 Giving some mid-air props to the Almighty for a job well done.

It’s shank or be shanked in Rush’n Attack. Or shot. Or exploded. Or jump kicked in the face. There’s a plethora of ways to die in Konami’s run-and-stab arcade port, and I guarantee your Tom Selleck-esque operative will experience each of them several times. Hard? You bet. Fun hard? Depends how rough you like your games. There are only six levels with which to test your mettle, which means, the difficulty increase is sharp right away; after the first level, your taste (or distaste) for death will dictate your progression. Rush’n Attack is a non-stop barrage of enemies from both left and right. The color of the enemy determines what kind of damage they’ll produce. Some enemies will simply run into you, while some will jump kick the closer they come to you. Others will shoot sporadically. You only have a knife to stop everyone, though occasionally, you’ll kill a bonus guy who will drop a missile launcher. Missile launchers are great for taking out several enemies at once, but you only get three missiles per launcher. Despite assigning the jump function to ‘Up’ on the D-pad, the controls work surprisingly well. There’s not a lot of technique to stabbing multiple guys as they approach you, only timing. You have five lives, no continues. And your Konami code ain’t no good here, so you can forget about extra lives. Personally, it’s nice to have an aggressive old-school challenge every so often, but this is definitely an “if you’re in the mood” type of game. Rush’n Attack shanks for keeps.
B-
The following two tabs change content below.