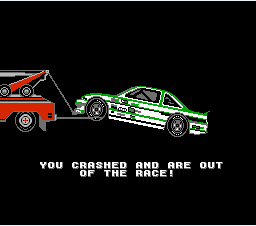 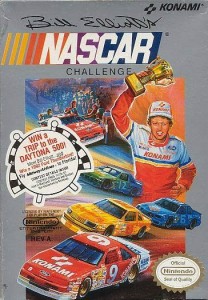 Mr. Elliott is holding what fraternity brothers like to call, an American stein. 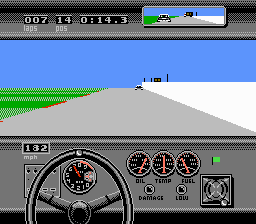 Gimme one reason to stay here…

I can understand why someone would want to be a NASCAR driver: millions of dollars, fast cars, fame, all the cheap beer you could drink, A-mur-ica, and so on. But Bill Elliot’s NASCAR Challenge does not properly convey how awesome it is to possess all of NASCAR’s perks. In fact, it only gives you a taste of one – driving around in circles for long stretches of time – and therefore, I don’t think it can be considered a proper NASCAR simulator.
Mr. Elliot makes his first digitized appearance on the main menu. From there, he guides you. What kind of car would you like? They’re all American-made, of course. We wouldn’t want any Hondas soiling that sacred asphalt! What course would you like to race on? There’s two oval shaped courses, one of which is Daytona, and two squiggly road courses. How about the difficulty? Unless you are an NES Nascar sim master, I would recommend shooting that difficulty down to 1 or 2. Otherwise, your taters will be deep fried, as I believe the saying goes. Once you get into the meat of the game (and it is the meat– no sissy veggies here), your fun mileage will vary, depending upon your affinity for going in circles. Even if one was a NASCAR fan, the sense of speed here is powerful slow. 184 mph shouldn’t feel like a gentle wind caressing one’s sideburns, that’s fer darn tootin’. The cars control decently, though, and you can take advantage of actual racing techniques, like drafting. If you like NASCAR and Nintendo, you have limited options, but if you like NASCAR and you own current consoles, Bill Elliott won’t scratch your everlasting itch.
C
The following two tabs change content below.