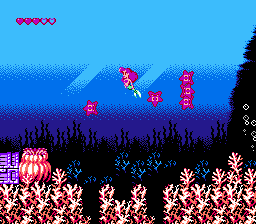 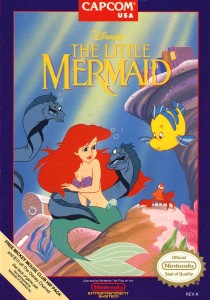 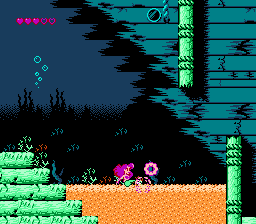 At the tender age of six, I beat The Little Mermaid for the NES. It was the first game I had ever plowed through and I felt like I had conquered the world. I did cartwheels in my room (I was a spoiled only child with a large room), I wa-hoo!-ed all over the place, I told my parents, who were proud of their son’s gaming prowess. It was a wonderful day that I still remember fondly. But I don’t mind admitting that I beat The Little Mermaid, not because I was a gaming prodigy, but because it’s one of the easiest platforming games on the NES. In fact, I knew it was easy while I was playing it, but I didn’t care. I destroyed Ursula, I saw the ending cutscenes, I proved to myself that I could beat a game. That’s all that mattered.
Twenty-two years later, The Little Mermaid is just as easy, but with enough light-hearted fun for a play-through or two. Of course, you star as Ariel, trying to stop Ursula from hypnotizing all “da fish in da sea.” You can blow bubbles to trap enemies with the ‘A’ button and swim faster by holding down the ‘B’ button. There are treasure chests all over the place, with green bubble upgrades and red power upgrades. The stronger your bubbles, the bigger the enemy you can trap within the bubble. The more powerful you are, the stronger rocks you can push with your tail, either to open treasure chests or to get to hidden 1-ups. Enemies are relatively scarce, though potentially dangerous if you’re not paying attention; the shrimps in particular are relentless in their pursuit of Ariel. By the time the fifth level rolls around, you’ll be surprised you’re already fighting Ursula. Two forms, and several enemies-encapsulated-in-bubbles later, and she’s gone. SPOILERS! Ariel reunites with Eric. They get married. She’s no longer a mermaid. Most importantly, she doesn’t use a fork to comb her hair. I always found that disgusting.
B-
The following two tabs change content below.