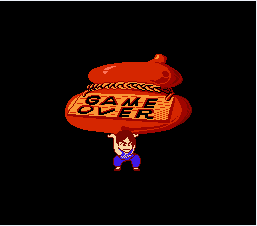 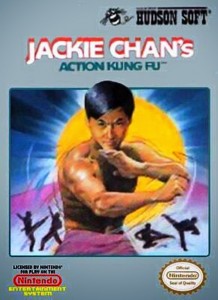 Perhaps the game would have sold better if Jackie Chan’s body possessed a neck. 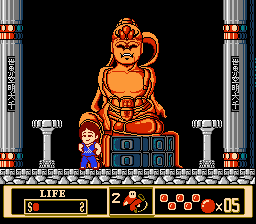 Not even Buddha will be spared in Jackie Chan’s destructive wake.

Jackie Chan’s a fighting machine. So many bones broken, so many stunts performed. The guy’s still going in his early 60s. Yup, Jackie Chan is awesome, and surprisingly, so is his NES game. With such a generic title as Action Kung-Fu and Hudson Soft’s reputation as a solid, if not spectacular developer, I was expecting mediocre poo-doo, like “The Karate Kid” (2010). Instead, I’m treated with solid gold, like “The Legend of the Drunken Master” or “Police Story 2.” Yes, the game really is as fun as his classics.
Ok, maybe Action Kung-Fu isn’t as great as the old Jackie Chan films where everyone speaks Chinese and kicks insane amounts of butt, BUT it’s one of the best platformers I’ve played in a fortnight, thanks to the variety in level design, incredible controls, and one of the best soundtracks never mentioned on a “best soundtrack” list.
A-
The following two tabs change content below.