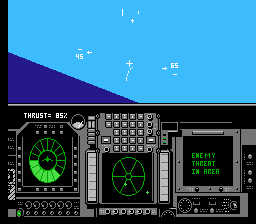 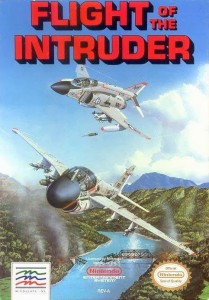 Once upon a time in Vietnam, two jets fell in love, until one of them was blown to smithereens over Khe Sahn. 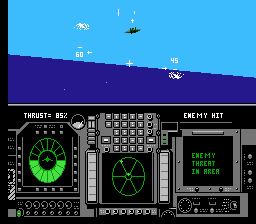 I found the most exciting screenshot I could.

I’ve had my cornbeef hash with many a “flight sim” in recent days. While F-117A Stealth Fighter and F-15 Strike Eagle were developed by MicroProse, Mindscape was apparently looking to get in on a piece of the illustrious flight-sim pie on the NES days. Hence why Flight of the Intruder plays almost exactly like the other two aforementioned games. The difference: Instead of piloting one crappily controlled plane, you control two! In the F4 Phantom portions, your goal is to destroy the enemy planes. The landscape is barren and boring. Sky above, water below, and two annoying gray jets that take a bajillion hits to kill. In the A6 Intruder portions, your goal is to bomb different things, like boats or tanks or other assorted military weaponry. Each mission contains at least one of each style, ensuring boredom for however long it takes you to stop playing. After each mission, you must land your plane and with more skill than you’d think would be necessary. You have to manage thrust, altitude, distance, vertical velocity, and the amount of rage that will inevitably be boiling over each time you try to land your stupid plane. If (when) you fail, you have to try again until you get your plane on one of the four hooks. 12 missions of this tripe? No thanks, I’m going AWOL. Had they made a game based on “Flight of the Navigator,” I’d give slightly more of a damn. Flight of the Intruder should be dishonorably discharged.
F
The following two tabs change content below.