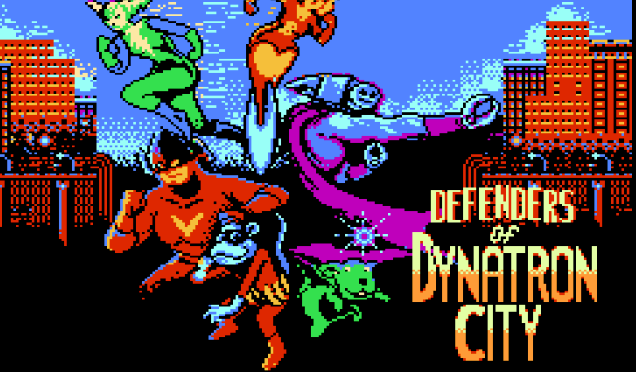 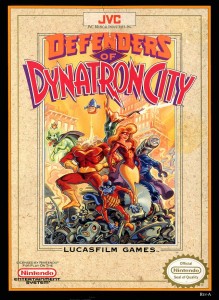 The game is not as whimsical as this cover, but there’s fun to be had here. 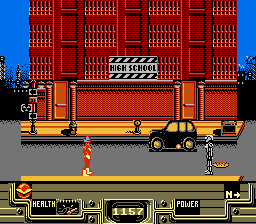 Destroying robots outside of the local high school… I think we’ve all been there.

JVC and Lucasfilm teamed up to bring us the classic Star Wars trilogy on the SNES, and also… Defenders of Dynatron City? I wasn’t exactly sure what the game was about when I booted it up, but the name didn’t exactly set my loins on fire. Turns out, this is Lucasfilm Games’ attempt to create their own superhero game. There are six characters, and only a couple who are truly worth using: Jet Headstrong (I know, it’s awful) is a bulbous man who can fire his head off as a weapon; Radium Dog bites people because he’s radioactive and they’ll die and stuff; Miss Megawatt shoots electric “diagonals” also known as “bolts;” Toolbox, a giant robot with a hammer for a head and YES HE USES IT!!!! Buzzsaw Girl, my personal favorite, throws buzzsaws and instead of legs, she rolls on one giant Buzzsaw – she took her name to heart, by golly! Lastly, there is Monkey Kid, who throws explosive bananas, amusing no one but himself. The game is mostly an action platformer, set in a sort-of “open-world” map, before there was such a term as “open-world.” Each level has a grid with a number of streets, and after you clear out the enemies on each street, shops will open up and you can enter every one of them. There’s not much in them, other than scattered items, but it still impressed me. At the beginning of each level, you’re given tasks to accomplish – mostly kill enemies, collect items, that sort of what-have-you – and a time limit. Once your tasks are accomplished, you fight a boss and move on. It’s traditional stuff, but with the addition of an “open-world,” you can accomplish your tasks in any order, which was fairly revolutionary at the time, I’d imagine.
It’s just a shame said innovation didn’t come with more clever, interesting, useful characters or an easily navigable map. Outside of Buzzsaw Girl and occasionally Radium Dog, the other four characters “special” abilities are fairly worthless. Seriously, Monkey Kid with explosive bananas? You’re not even trying, Lucasfilm Games. The map system is incredibly confusing, despite the map itself being easily readable. It seems that every time you go north, you don’t necessarily go north; the same applies to east, west, and south. The hit detection is poor, even with the Wonderful Buzzsaw Queen. Your best bet is to buttonmash like a boss, and let God sort out the robot parts. Also… I never died in the game, though I did have a health bar? Yeah, the game is strange and broken and slightly ludicrous, but I’ll be hornswoggled, I enjoyed the majority of my time with it. Sure, DYNOtron City would arguably be a better game because it would be an excuse for rampaging robotic dinosaurs to run amok and destroy things in inner cities across the world. Until that time comes, you could play worse than Dynatron City.
B-
The following two tabs change content below.