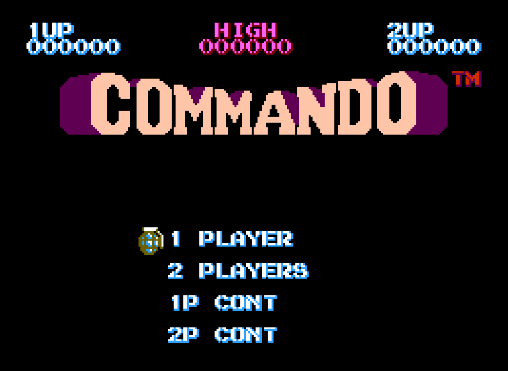 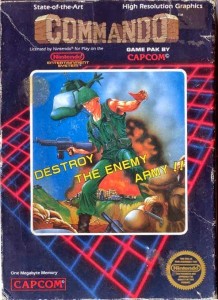 The enemy army includes anyone other than you. 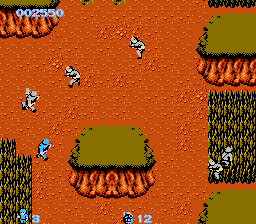 The idea of the “lone wolf” soldier, a renegade, no-holds-barred, get the job done, no-nonsense SuperBeastMan captured the hearts of moviegoers in the 80s and 90s. Arnold, Jean-Claude, Sylvester, Chuck, among several others, proved that people loved explosions, oily muscled men, and one guy taking on entire countries, leaving only a trail of foreign bodies in his wake. It’s disturbing when you stop to think about action movie premises, but while you’re watching them, the dumb fun they provide can’t be beat. Commando is sadly not based on the movie of the same name, but certainly the concepts are similar: destroy the other guys who shoot at you, no questions asked.

In the game, you are the Retired Unnamed Supersoldier, called on to do One Last Task for the good of your country. Should you accept, you will be going against scores of foreigners with guns single-handedly. Of course you accept: killing is all you’re good at, right? Scores of gray and green soldiers will swarm at you from every corner of the screen. You don’t have to kill every one of them to get by – just the ones that bum rush you. There’s not much difference in the enemies and the way they attack you. The most common enemies fire one shot and try to get close to you. There are others who fire multiple shots from under cover, some with bazookas, some with bayonets. At the end of every stage, you fight a ton of soldiers, including one general decked out in green. Strangely – or perhaps, realistically – he’s not any harder to kill than his lackeys. This formula repeats for three more stages and then, Conglaturations! You destroyed an entire South American country in fifteen minutes!

While Commando is being played, the game is quick, relentless, and fun, but as an early NES game, it suffers from a few problems. I personally don’t have an issue with shooting wave after wave of nonsensical idiots, but even I started to tire of the game when I realized there were only four different levels. Yes, the levels repeat, but it didn’t seem like the challenge had increased (unless I’m just amazing at this game, which I very well could be). There are no upgrades to your weapons. You have the same standard machine gun and grenades throughout the entire game. You can rescue people for points and if you bomb a certain spot in each level, you can enter an underground area and collect a glowing item for points, but those are the only extra “features” within the entire game.

I can’t deny that I had fun playing Commando, but I also don’t see myself returning to it anytime soon. It’s a basic shooter made in 1986 B.C. (Before Contra) and it definitely feels like it. As far as aesthetics go, the graphics feature an array of browns, yellows, grays, and greens – all the colors of the vomit/diarrhea rainbow. The music is surprisingly terrible, given Capcom’s track record of amazing soundtracks. The control is legit, as it needs to be for such an action-packed shooter. But hey, much like the action movies Commando mimics, it can be stupid fun for a brief period of time. Besides, when you’ve had a bad day, who doesn’t feel like mowing fools down by the hundreds with an AK? Within reason, of course.