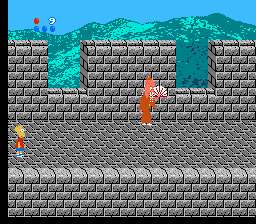 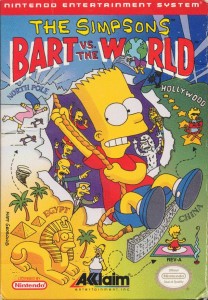 Marge ice skating with the penguins is brilliant. 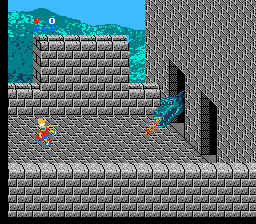 Less than a year after the atrocity that was Bart Vs. The Space Mutants comes Bart Vs. The World, a slightly better, if still underwhelming use of the coveted Simpsons license. This go-round, Bart wins a contest put on by Krusty the Clown and (wait for it)… The Simpsons are going to China! And the North Pole! And, if you have patience, Egypt and Hollywood; not really “The World,” just a few choice locales. Mr. Burns has rigged the contest to make Bart and the rest of the Simpsons win. Why? To rid his life of the Simpsons forever. But why does Mr. Burns hates the Simpsons so much? He’s traditionally ambivalent towards the family, and for a number of years, could never remember Homer’s name. But it doesn’t matter, the story is merely a poor excuse for the game to begin.

Fu Manchu Burns is rather shy and girlish.
Bart Vs. The World has mediocre platforming gameplay, sans objectives (outside of collecting any miscellaneous crap you can find). Jumping is, once again, needlessly difficult, though I do feel it’s a bit improved over Space Mutants. Still, learn how to jump with Bart in China, or you may as well put the family vacation on hold. Each area you visit has two levels and a smattering of mini-games. The mini-games aren’t necessary to completing each location, but you’ll want to do them anyway. If you win, you get collectible Krusty heads. Get enough Krusty heads at the end of each stage and you’ll get more lives – lives you will need if you’re thinking about going to Hollywood. 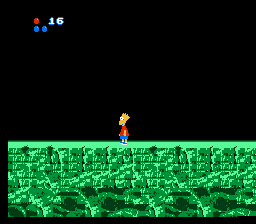 A hole you can get stuck down in the second level. You’ll know when you’re there.
Bart Vs. The World is such an improvement over Space Mutants that one might be deceived into believing that it’s a good game. It isn’t. The levels are boring, frustrating, and apart from the Great Wall of China skateboarding portion, forgettable. Like in Space Mutants, the graphics have a washed-out, graininess, and the music is the Simpsons theme put on a nightmarish loop. Consider Bart Vs. The World like a modern-day Simpsons episode: a few decent bits, surrounded by an otherwise terrible script that couldn’t be less amusing if it tried.
C-
The following two tabs change content below.