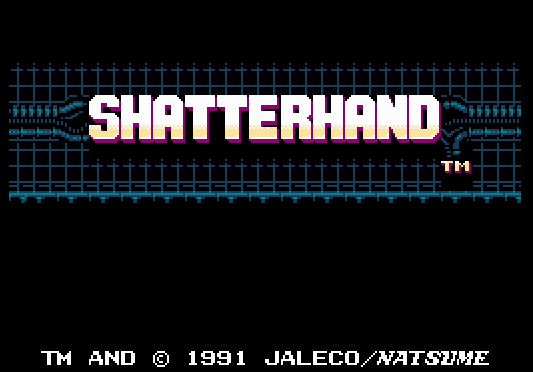 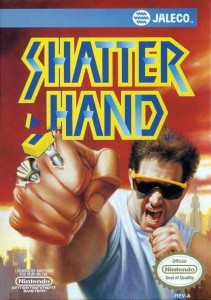 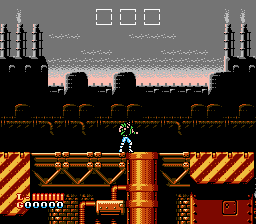 In Shatterhand, you play a man – let’s call him Biff ShatterPow – whose hands can literally cripple nations. Or at least shatter them. It’s no exaggeration to say that Biff’s hands do almost all of the work in this difficult action platformer. Punch, uppercut, and thrust your way through seven levels of mechanical mayhem, mayhem, MAYHEM. Shatterhand’s not groundbreaking, but it employs enough unique ideas to warrant a playthrough.
The first level introduces you to Shatterhand‘s concepts; namely, using your hands and only your hands to destroy everything in your way. At first, you feel like a regular Schwarzenegger/Stallone hybrid, toppling metallic towers and taking down large robot walkers with just a few simple punches. But even Biffs need a helping (shatter)hand, and that’s where your levitating robot buddies can assist. After acquiring three tablets with the alpha/beta insignia, a robot will appear above you and perform a certain task, depending on the tablet inscription and the order in which they were collected. Let’s say you got two alpha tablets and one beta tablet in that order: the robot would fire a diagonal stream of lasers directly in front of you. There are eight different kinds of robot buddies, some more useful than others (the Flamethrower robot is too much of a pain in the heat of battle). They take damage just like you, but if you keep them out of harm’s way, they will stick with you throughout the level. Also, enemies drop either small or large gold coins. Use the coins at different white platforms throughout the level to either purchase health, power-up your punch, or give you an extra life.
Shatterhand is based on a live-action television series in Japan called “Super Rescue Solbrain.” The original Famicom version – entitled Tokkyuu Shirei Soul Brain –actually stars a robot instead of a man with a strong shatter hand. This makes a lot of sense, given the protagonist’s insane strength. The game is probably fun in either incarnation, but strangely, I think the American version is the more ridiculous of the two, at least in conception. After playing a million and a half action platformers on the NES, very few stand out as fresh or original. Shatterhand is different, and you should totally play it.
B+
The following two tabs change content below.