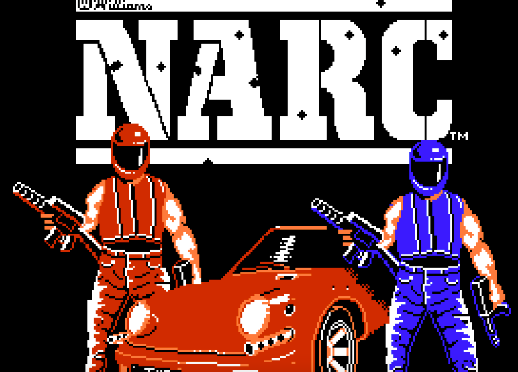 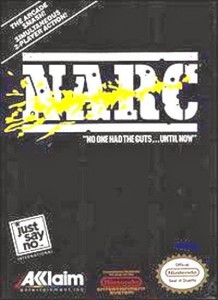 “No one had the guts…” to do what, exactly? Port this game with working code? 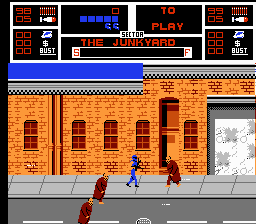 One renegade NARC agent decides to wean down the homeless population of the city.

Despite never seeing NARC in any of my hometown arcades, I knew it was a big hit when I was a kid. Why? Because it was featured prominently in the first “Teenage Mutant Ninja Turtles” film. Remember the scene where all of Shredder’s young minions are hanging out, smoking, drinking, skateboarding, and of course, playing arcade games? Yeah, that’s where I learned that one of the bosses in Narc was a giant skull head, and I knew I had to seek it out. Today, my five-year-old self’s dream has been realized: after years of pondering, I stepped into the world of NARC. After giving it some time, I have also come to a conclusion: that skull head thing remains awesome, but NARC itself is a trash heap, no better than the thugs the game seeks to put away. 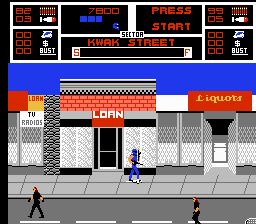 Yeah, Kwak Street’s always been a problem. Look at those thugs going to get their loans and liquors.
Yeah, NARC‘s failings are probably due to it being an NES port, but that doesn’t excuse Rare’s sloppy treatment of the game. You play as a NARC agent (gasp upon gasp!) who shoots first because he never thought to ask questions. Busting people and collecting bags of drugs give you additional points at the end, of each stage. Unless you don’t want to die quickly, I suggest either avoiding people outright or shooting them and moving on; “busting” them involves standing next to them for a second or two, giving other sources of evil all the time they need to shoot you down. Abhorrent graphics don’t strengthen NARC‘s case (sharply pointed lines representing bullets? Seriously?), but the game’s real crime is the sloppy controls. Pressing ‘B’ allows you to jump, but only sometimes. You can also crouch down with ‘B,’ but only when you’re not jumping. Holding down ‘A’ is how you shoot your gun, while tapping ‘A’ fires missiles. Lastly, your NARC agent is slow, and in general, seems to lack discipline. NARC’s controls aren’t the worst I’ve ever played with, but they add to the general worthlessness of the game. I believe it was around Stage 3 when I hopped into a Porsche and thought, alright, this game’s gonna pick up! I immediately crashed into a green brick wall randomly placed into the middle of the road and my Porsche disappeared. This image perfectly correlates to my initial feelings about the game: I was excited to pick it up and play it for the first time, but within minutes, my young self’s dreams about how awesome NARC should be crashed and exploded into an out-of-nowhere brick wall.