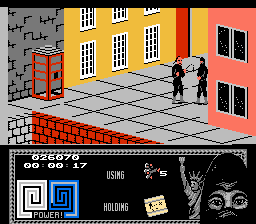 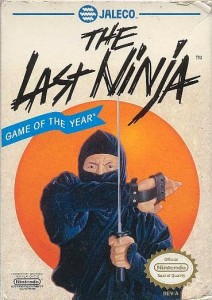 Just in case you were curious this is the “Game of the Year.” 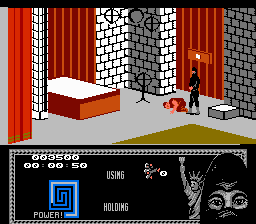 For those who like their reviews with a side of history, stuff this into your hipster corn cob pipe: The Last Ninja for the NES is actually a port of The Last Ninja II for the Commodore 64. Before I learned that, I was ready to Ginsu Knife the crap outta this game for clunky controls, atrocious graphics, and an all-around sense of wankery on the developer Jaleco’s part. Why would any self-respecting developer design an NES action/adventure game with a 3/4 perspective and isometric graphics, unless they’re trying to keep the action as slow as possible?
Granted, quickness is not the point of this game. The point is to collect items from around each level and use them at other parts of the level, while either engaging or running away from enemies. But I’m a ninja, right? Shouldn’t I be fast and deadly, if not stealthy? This supposedly “last ninja” is none of the above. The game gives you lots of weapons, should you look for them, so there’s a sense that you’re supposed to be able to fight well. Still, my advice is to avoid as many enemies as possible. Due to the game’s perspective and all-around wonkiness, it can take multiple tries to line up your attacks with each enemy. Should you decide to beat down your opponents, be aware that it takes depleting their health bars twice to fully get rid of them. Some of them also have shurikens that can one or two-hit kill you. Enemies, controls, perspective, all of them suck, and yet, I was drawn into this game for its unique take on the ninja sub-genre. Should you decide to plunge into the game’s depths, you’ll be rewarded, but unless you’re committed, I wouldn’t recommend it. I certainly respect what The Last Ninja was trying to achieve, but on a system with Ninja Gaiden II and Shadow of the Ninja, it can feel slow and outdated for those who aren’t prepared.
B-
The following two tabs change content below.