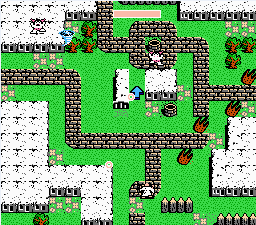 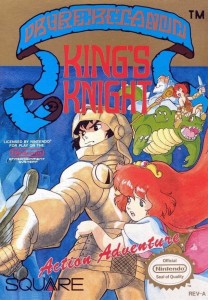 At least Square didn’t try to “Americanize” this cover with some beefy hunk and scantily clad bikini babe, although “action-adventure” is a real stretch. 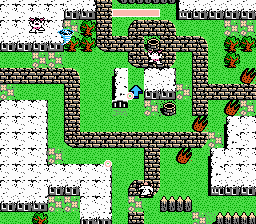 This screenshot is obtuse, so allow me to explain: you’re an old man, perhaps in Greece, shooting at evil mythical creatures.

Did you know that Squaresoft made a vertically scrolling shooter with RPG elements? Perhaps this is not news to any of you, but I’m stunned, not only of King’s Knight‘s existence, but that no one’s ever tried to improve on this bizarre, unique formula. For the first four stages, you begin playing as a different character. In Stage 1, you’re the knight, stage 2, the wizard, stage 3, a dragon, and stage 4, a thief boy. The goal of each stage is to blast everything in sight (even knights and thief boys have weapons that shoot projectiles, apparently) and collect as many items as you unearth through shooting to increase your abilities and levels. Abilities to increase include your weapon, your speed, your defense, and your jumping capabilities. If any of your characters dies on their respective stages, they’re gone for good and you may as well start over from the beginning. Essentially, the point of the entire game is to build up each character’s levels on their stages, then on the fifth stage, you switch between them in order to defeat the final boss. Hidden collectible elements in each stage will also allow you to cast strong spells on this final boss.
Square was definitely ahead of their time here. Who would have known that twenty-some years later, RPG elements would be showing up in everything from Call of Duty to Street Fighter? While I applaud the overall concept, King’s Knight is hampered down by some choppy controls and borderline obscene difficulty (it takes at least ten items of health to restore your life bar, and only three to destroy it?). Square’s heart is definitely in the right place, though. Someone needs to resurrect this idea, stat!
B-
The following two tabs change content below.