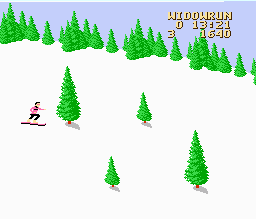 With such gratuitous amounts of hot pink on the cover, you know this game is wicked!!! 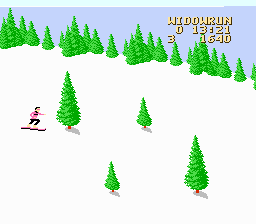 Just a cougar looking for a good time on the slopes!

When a game is titled Heavy Shreddin‘, one would assume it’s either a progenitor of the Guitar Hero franchise, complete with 8-bit renditions of Guns ‘N Roses songs and crudely pixelated “guys” in spandex, fishnets, and long, curly hair; OR it’s a snowboarding game whose title is trying desperately to sound edgy, in typical early 90s fashion. Heavy Shreddin’ is most definitely the latter (shame, that – I would like to see what an 8-bit Guitar Hero-esque game would look like), and if I’m not mistaken, it’s the first type of game of its kind that I’ve played for the NES. I’m not sure how “heavy” this game really is, nor did I ever feel like I was “shreddin'” down the slopes in a technical sense, but I’ll say this about it: it’s a perfunctory 8-bit snowboarding game and nothing more.
Heavy Shreddin’ gives you five different events to contend with – Downhill, Slalom, Half-pipe, Moguls, and Backwoods – and contend you shall! I never got past the Slalom section, no thanks to the sluggish controls. Darting around trees and jumping over obstacles like running water are all fine and good, but the D-pad doesn’t seem responsive enough. I can’t imagine what some of the later events are like when you have to perform stunts. Stunts require pressing ‘A’ and then a direction on the D-pad. Pulling off one stunt isn’t a huge issue, but several in a row, while having to avoid obstacles? Either your hand is going to ache or you’ll throw the controller out the window. I’m not sure Heavy Shreddin’ is worth that amount of annoyance.
Other grievances, petty though they may be, include the awful Atari-rendered graphics (what’s with the vomit yellow on the title screen? ANY OTHER COLOR IS BETTER THAN VOMIT YELLOW!) and the wonky music, but mostly it’s frustrating to think that this game wants to be better than it is. It’s certainly ambitious enough, but the NES – or the developers of these types of games, I’m not sure which – seem to have a hard time emulating extreme sports. Not until the 32/64-bit era, which saw Cool Boarders and 1080 Snowboarding did snowboarding really get its due. It’s important that Heavy Shreddin’ tried, but it’s also important that it failed.
C-
The following two tabs change content below.