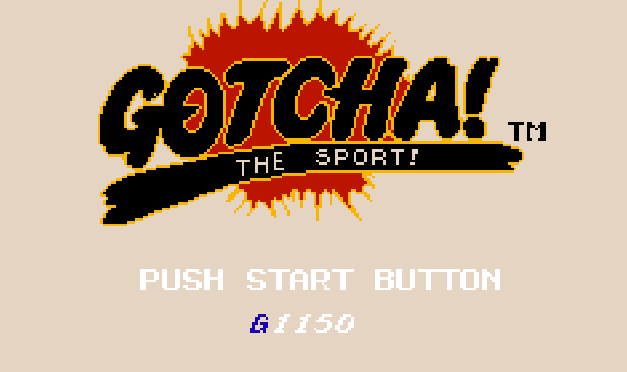 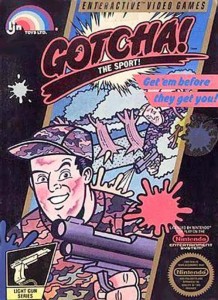 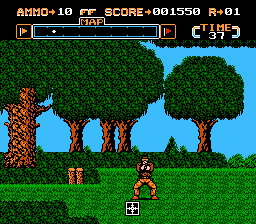 Paintball Wars were about as gangster as the late 80s got, aside from Public Enemy, of course.

With a name like Gotcha! and a cover that reeks of failed hopes and dreams, I expected little to nothing from this game. A bunch of grown men playing a hybrid of capture-the-flag and paintball in the woods? I would love to do this in real life, but it sounds like it would be an awful, potentially hilarious gaming mess. Well, shock the monkey: despite its brevity and the relative ease with which the game is completed, Gotcha! stands out from the other Zapper games by offering you more control. Instead of automatically scrolling levels, you must manually scroll the level along with the D-pad, while shooting guys that pop out of random places along the way. It’s surprising what a large difference this makes. The game gives you complete control to go back and forth across the level as you see fit. Granted, you’re going to want to move forward as quickly as possible, due to the time limit. The whole goal is to capture the other team’s flag, then move back to the other side of the screen before time runs out. One can get bogged down in shooting every person that runs on screen, so it’s better to just shoot the guys who aim their weapons at you or guys who carry ammo. Unfortunately, there are only three levels – a forest level, a city level, and a snow level – and while the levels repeat, it still feels like the game is over far too fast. There are three difficulty levels, but even the hardest difficulty is only mildly challenging. If Gotcha! would have accelerated the difficulty across each level, added at least seven more stages, and thrown a couple bosses in the mix, this could be one of the quintessential Zapper games. The fun that’s had in Gotcha! is only eclipsed by the potential that was lost. Shame.
B-
The following two tabs change content below.