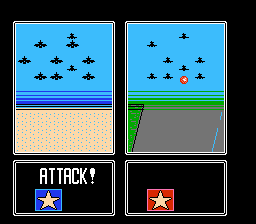 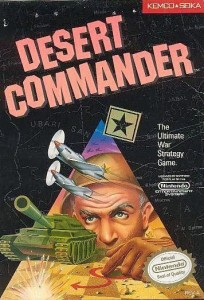 Patton tries to play God. Based on a true story. 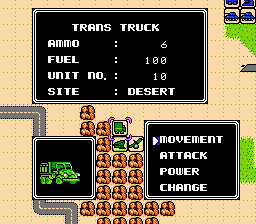 You’re in a desert, just in case you couldn’t tell.

In Desert Commander, you are at war with Iraq or Iran or one of those Middle-Eastern countries that has gas for 29 cents a gallon, I dunno. You have a certain amount of units you can control – bi-planes, trucks, tanks, infantry – and your goal is to meet your enemy head-on. Your enemy has similar units, but in five out of the six campaigns, their numbers will be larger. Each unit can move a limited number of spaces and has a limited amount of ammo, so mind your stats. You must also be aware of the terrain your units move onto. Anything that has wheels or feet are obviously slowed by more mountainous terrain. If you engage your enemy, you’ll be treated to a cut-scene of bullets, bombs, and explosions. The only real complaint I can think of is how slow your units move. Granted, this was the NES and sprites could only move as fast as they’re programmed, but in the current go-go age of the 21st century, it feels chunky. I’m not the largest fan of strategy games, as I’ve expressed earlier on this blog. I do have a soft spot for Advance Wars and to play a simpler version of it on the NES, sans anime graphics, is a joy.
B
The following two tabs change content below.