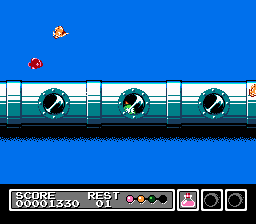 Far be it from me to shortchange anybody’s request for a game review, but… you all gave me a lot of requests; 43, if my math isn’t mistaken. There’s no way I can devote large chunks of time to each game – especially deep titles like Sweet Home, Mother, or Final Fantasy 2 and 3 –and get my Second Quest ready for launch within the next three weeks. On top of that, there’s still my Bottom 86 List I gotta churn out, which should begin next Monday or Tuesday. As a result, I’ll be playing as many of your requests as I can and doling out little mini-reviews for each of them sporadically. God willing and the creek (which is my life) don’t rise, I’ll get to all of them.
GIMMICK! or MR. GIMMICK

Gimmick lets his cares float away.

Wonderfully inventive, frustrating as all-hell platformer that was only released in Japan and… Scandanavia?! I enjoy Gimmick‘s presentation, soundtrack, and interactive world more than I enjoy playing the game itself. Gimmick’s star throwing ability – used as weapons and as platforms that he can ride or use to boost himself upwards – is both ingenious and obnoxious. Most of your time spent with the game will be wrestling with the latter ability; quick breezy platformer, this is not, despite the bright, colorful graphics. I applaud the developers for pushing the NES to its limits, but I’ll admit, I couldn’t break past the steep learning curve. If you’re interested in Gimmick, watch Frank Cifaldi’s Longplay first. 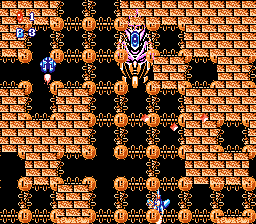 That has to be a Transformer…
Crisis Force finds a greater balance between chaos and stability than the destroyer of worlds known as Recca. You can switch your ship between three different configurations at any time: the first shoots forward, the second shoots forwards and backwards, and the third shoots forwards and sideways. All of these configurations can be upgraded with red pods (your attack strength) and blue pods (your firing strength), while bombs help clear out the clutter. Collect enough ring pods and your ship will transform into an Huge Ultra Awesome Mega ship that takes up the entire middle section of the screen. Needless to say, you’ll be invincible and capable of unleashing great destruction – for a limited amount of time, anyway. Crisis Force is also a late-period Famicom game, so crazy graphical flourishes (like a chasm slowly opening below your ship) and a kickin’ soundtrack are a given. Konami’s shoot-em-ups are always top-notch, but Crisis Force is something special. Shame it never got an North American release.
DRAC’S NIGHT OUT 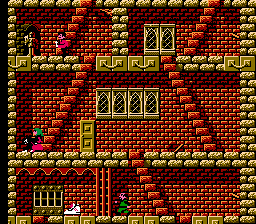 If only Drac had his pumped-up kicks…
In Drac’s Night Out, you move from castle to village to castle, sucking blood and turning innocent virgins into vampiresses that do your evil bidding. It’s the most evil game ever sponsored by Reebok and Parker Brothers. Seriously. Dracula even equips Reebok Pumps at certain points to make him go faster. The sponsorship is hilarious in its brazenness, but surprisingly, it doesn’t detract from the game at hand. Not sure why the developers felt the need to make Dracula so weak, though. He can’t touch anyone without getting killed. Like the spelunker in Spelunker, he can’t fall a couple feet without dying. He can hypnotize people, but it just makes them stand still for a few seconds; even hypnotizing takes power away from his limited blood supply. If the denizens of the castle didn’t constantly regenerate, Drac might have more of a fighting chance. He’s Dracula, for crying out loud! He doesn’t have to be overpowered, but a woman in a shawl shouldn’t be able to lay him out either. At its core, Drac’s Night Out is a cheap, repetitive action/puzzle hybrid that could have been great.
The following two tabs change content below.