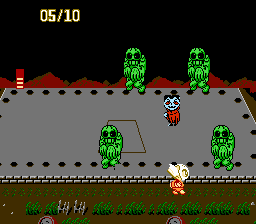 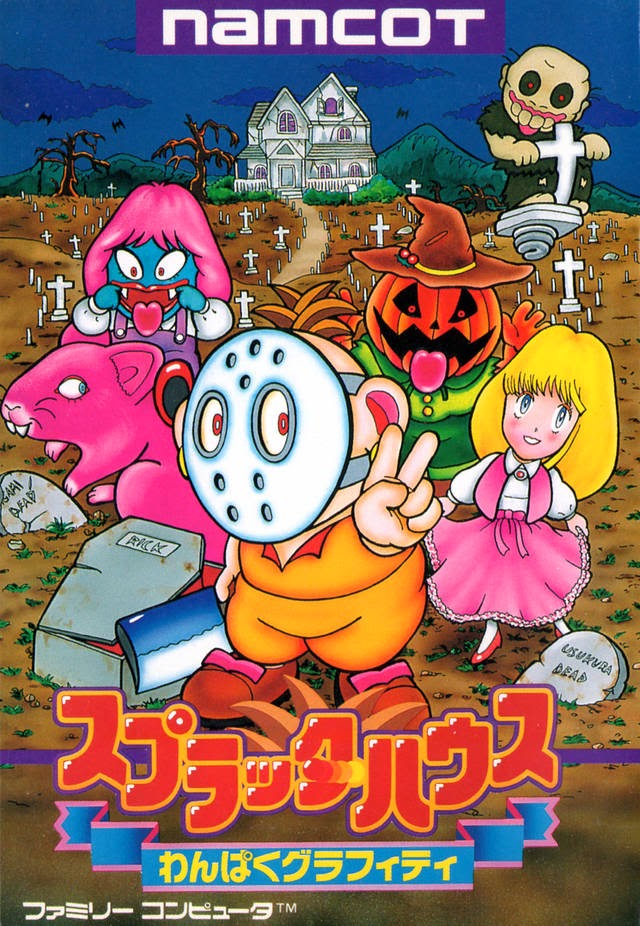 A fresh take on a bloody favorite.

It’s amazing that the Splatterhouse series didn’t offend more parental sensibilities when its sequel debuted on the Genesis in 1992. The series wasn’t just gory: it was pulpy, meaty, thick, intrusive. We’ve all heard of “Reign in Blood” by Slayer. Splatterhouse is “Tomb of the Mutilated” by Cannibal Corpse. The series was a cult sensation at best, though, and as a result, escaped the radar of easily riled up senators and fretful mothers. Once Mortal Kombat, Doom, and Night Trap began to ruffle the jowls of America’s moral know-it-alls in ’93, Splatterhouse was less than an afterthought. The children who indulged had their innocence replaced with leagues of nightmares, and parents were none the wiser. 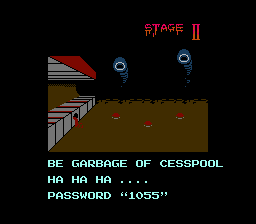 Cryptic nonsense abounds in the depths.
Splatterhouse: Wanpaku Graffiti, however, is fun for the whole family. Rick, Jennifer, and the whole motley bunch of monsters have been super-deformed for our amusement. Killings remain, though blood is largely, if not entirely, absent. Horror parodies run rampant: everything from a head-spinning Linda Blair to possessed Texas chainsaws to scores of chest-bursting facehuggers gets thrown at poor chibi Rick. Rick only has Baby’s First Axe (and the all-too-infrequent shotgun) to defend himself from the melee, though, which is unfortunate. Rick is small, thus his weapon is small, I understand, but it’s frustrating that the axe has such poor range. The platforming sections are easy enough to handle, but the boss battles – which usually involve numerous creatures moving in distinct varied patterns – can be frustrating as all hell. It takes an astonishing amount of grace to navigate Rick’s squatty body between enemies, dole out damage to them, and not take any yourself. Candies and burgers will pop up intermittently to give Rick some aid. Wanpaku Graffiti is a one-life-then-it’s-game-over type of experience, so diabetes and heart disease are welcome, even if they are band-aids at best. You do have five continues and a password system, though so you can’t fault Namco(t) too hard on the difficulty. Roll with Rick long enough and you’ll get the hang of his axe wielding; doesn’t mean you’ll never want to give him up.
Wanpaku Graffiti also has a unique “leveling up” system. When you start the game, you’ll notice a counter that reads 0/10 at the upper left hand corner of the screen. Kill ten enemies and you gain an extra health point on your life bar. The counter resets to 0/10, though over time, it will increase to 0/20, 0/30, etc. It behooves you to kill enemies like crazy, anyway: to get more health points and because it feels so darn satisfying. 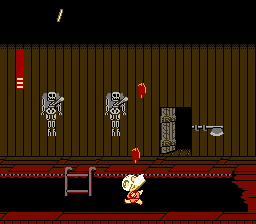 Skeletons chuckle at your peril.
If you only knew Splatterhouse as the disemboweling, entrail-angel-making series from the TurboGrafx/Genesis-era, Wanpaku Graffiti will put an unexpected smile on your face and a song in your heart. It’s not the most in-depth of platformers, and the occasionally infuriating gameplay will rattle your bones. The light-hearted presentation, however, more than makes up for the game’s minor flaws. Wanpaku Graffiti won’t restore that innocence you’ve been clamoring for, but it should put those nightmares to rest – if only for awhile. Cheers to commenter FieryReign for the suggestion!
B+
The following two tabs change content below.