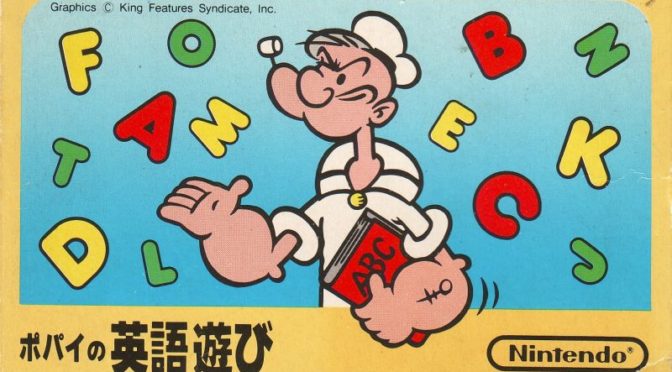 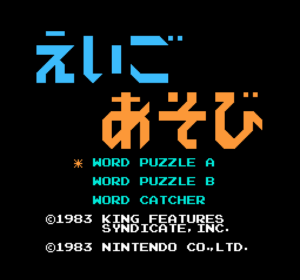 Popeye knows the language of every child.

Popeye’s comprehension of the English language has always been spotty at best. But I’ll be darned if Nintendo thought the oft-incomprehensible sailor was qualified to teach it to the children of Japan. 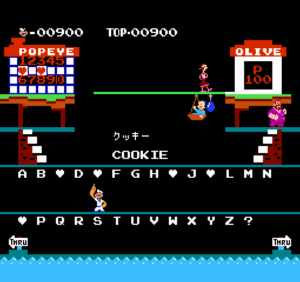 Popeye no Eigo Asobi (or “Popeye’s English Game”) is an absolutely adequate English lesson. As Popeye, you choose from one of six categories – Animals, Sports, Food, etc. Olive Oyl tosses hearts which form a word in katakana that Popeye then has to spell out in English. All 26 letters of the American alphabet* are at Popeye’s disposal, and naturally, he doesn’t just pick a letter – he uppercuts it, presumably with the power of spinach. Spell ten words correctly and you’re rewarded with more words to spell in a different category. Pick an incorrect letter for the word and Bluto punches Baby Huey, like a true psychopath. If you grow weary of the one-player English lesson, there’s also a two-player portion where Popeye (Player 1) and Bluto (Player 2) try to see who can catch the most letters from Olive Oyl and spell simple words like “Bell” and “Cat.” 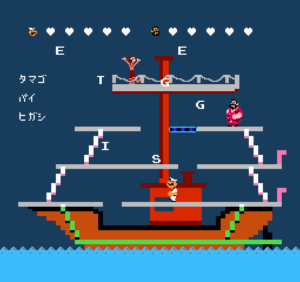 Nobody wants to control Bluto.

Popeye no Eigo Asobi is great if you need to brush up on your katakana or you’re a five-year-old Japanese child learning English in 1983. If you do not fall into either of these two categories, the game is still better than Donkey Kong Jr. Math or – dare I write – the original Popeye.