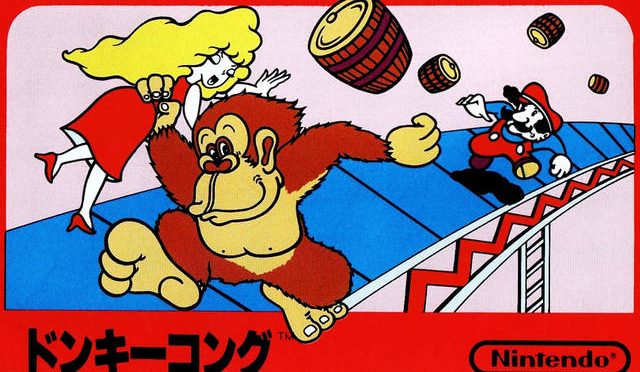 HE’S FINALLY BACK TO KICK SOME TAIL! 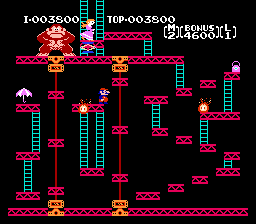 Let the burning of britches commence!

Donkey Kong, or The Angry Ape that Birthed an Empire. Today, Donkey Kong wears an endearing smile and a hip tie. In 1981, he was little more than a “King Kong”-ripoff, climbing up high places, damsel in tow. Mario also makes his debut here as gaming’s beloved squatty workhorse, huffing and puffing up construction sites to rescue his former lady love Pauline. Notice that Mario’s love for red-and-blue ensembles, extravagant jumping ability, and penchant for collecting items all began here.

If you’re an older Nintendo fan, you’ve probably experienced Donkey Kong countless times, either with the NES cartridge, an overpriced GBA port, or several Virtual Console re-releases. The Famicom version is no different than any of those. The three levels (minus the “Pie Factory” level from the arcade) are completed quickly, then repeated over and over again. Perfect for an arcade game from the early 1980s, not so great if you want to play something that lasts more than five minutes. We should all be grateful that Donkey Kong kick-started Nintendo’s gaming business. But unless you like racking up those sweet, sweet points or you’re studying for a Video Game History 101 class, there’s little reason to indulge in its groundbreaking shenanigans today.

THE LEADER OF THE BUNCH, YOU KNEW HIM WELL…